First drafts can be fun!

I did warn you all that I'd disappear when November arrived, right? Well NaNoWriMo has been engrossing, exciting and exhausting. And for the first time ever, I've actually completed the 50K challenge while it's still November. Yes, it is only the 9th, so I've had a phenomenal week of writing.

Though I've worked on other books with mystery elements, this is the first time I've written something that was supposed to be a mystery before I even started writing, and it's been so much fun! The story is about Tess, a renown pastry chef who quits her job when she finds her boss/fiance kissing another employee. She drives to the small town of Silver Springs, Arizona, where her best friend since they were six immediately starts hassling her to stay and open a custom desserts shop. A wedding, a murder, and possible arrest hang over her head as she's drawn into the search for what really happened that night. My first draft is way short for me at 58,000 words, but most of it is straight dialogue, so as I flesh out the scenes and add things the story needs to become complete, I'll probably end up back around 90K, which seems to be the usual length for me.

I have to tell you that the last quarter of a book is usually the hardest for me to write (I've probably said that before). But last weekend I attended a writing retreat in Park City with fifteen of my closest friends--well, okay, honestly I hadn't met some of them before this, but that's beside the point. Since I was slightly over halfway through my first draft, then I had a good reason to force myself to keep writing through the hardest part of the story. If I felt lost, that's fine, find something else to write, because we were having a speed competition and I had to find something to work on. Uncertain about someone's motives, write it anyway, and see what they tell you.

I know, that probably seems odd if you aren't a writer--you probably think we decide everything, and boss the characters around, but once in a while they push back. For example: I couldn't get my climax scene to work where Tess and the killer came head to head. I kept trying to write it and it just wasn't working. Then I had a brilliant moment when I realized I was trying to make the WRONG character the murderer! How did I not realize that I'd screwed up the investigation? As soon as I changed the angle, suddenly it all came together. And it was easy and fun (and it probably stinks, but that's okay, first drafts always stink!)

Funny how the idea of writing murder mysteries overwhelmed and terrified me a few weeks back. I think I'm going to have to play with this genre a lot more in the future.
Posted by Heather Justesen at 5:45 AM 1 comment:

LDStorymakers conference mass book signing
May 15, 2015, Provo, Utah
4:15-5:30 At the Utah Valley Convention Center
Many, many authors will be there with books or you can bring your own. I will be among them!

Get the Sweet Bites Bakery books on Audio! 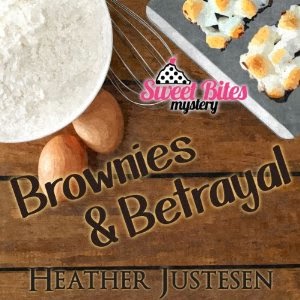